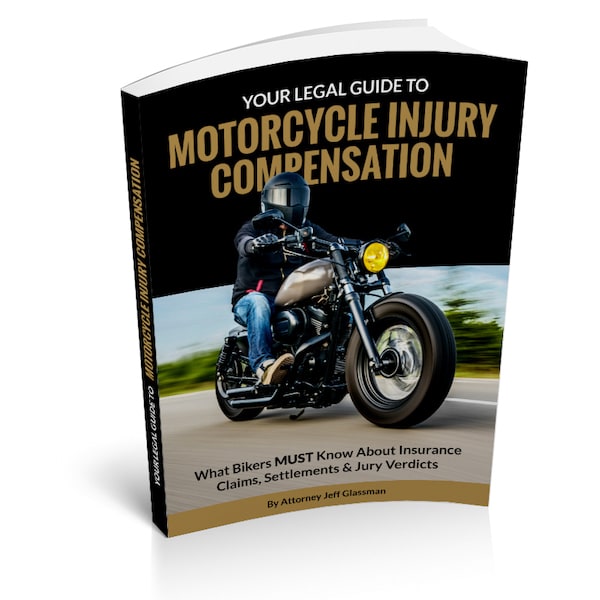 At the Law Offices of Jeffrey S. Glassman, LLC, many of our motorcycle accident attorneys are avid riders as well. We firmly believe in the rights of motorcyclists, and we understand the difficulty victims and surviving loved ones can have in securing adequate compensation from insurers.

An estimated 4 million motorcycles are registered in the U.S., and every year, thousands of motorcyclists are killed and many more seriously injured in traffic accidents.

In Massachusetts alone, there were nearly 200 motorcyclists who died on our roads between 2010 and 2013, according to reports from the National Highway Traffic Safety Administration. Fatalities decreased by 25% from 56 in 2015 to 42 in 2016. Of those, more than 80 percent were wearing helmets, as required by state law for all riders. Motorcycle riders are 28 times more likely to die in an accident than passengers in automobiles.

Motorcycle accidents are most often the result of the other driver’s negligence. Some of the most commonly-cited causes include:

Too many drivers are not paying proper attention and watching out for motorcyclists, who have as much right to the road as those in four-wheeled vehicles.

Far too often, insurance companies complicate the process of collecting damages in a motorcycle accident.

Massachusetts law requires personal injury protection (PIP) insurance protection on all auto insurance policies. This covers some of the cost of medical bills, lost wages and funeral expenses up to a certain amount for insureds, regardless of fault.

However, insurers do NOT have to provide PIP coverage in policies covering motorcycles in this state. That means the rider or passenger of a motorcycle most likely will not collect be able to collect PIP coverage in the event of a crash.

That’s why it is so important for motorcyclists to carry adequate health care insurance, and should also look into other forms of coverage. A motorcyclist who is at-fault for an accident may be personally liable to cover the costs of a passenger’s injury.

But when the motorcyclist is not at-fault, as is very often the case in Boston motorcycle accidents, the injured person may seek to recover damages from the at-fault driver and his or her insurance company.

In order to prevail in these cases, it’s necessary to show negligence on the part of the other driver. This means one has to show the other motorist failed to use reasonable care as expected, this breach of duty caused the crash and the crash resulted in the motorcyclist’s injuries or death.

By contacting an experienced motorcycle accident lawyer in Boston, you will have leverage in negotiations with insurance companies. Often, insurers will attempt to contact victims immediately following a crash, in an attempt to strong-arm a low-ball settlement deal. It wise to refrain from any discussions with any insurance companies until speaking with an attorney.

If negotiations with the insurance company are unsuccessful, at that point, we can explore litigation.

Injuries that result from motorcycle accidents are often severe. This is owed to physics. A person on a motorcycle simply has less protection than someone in a motor vehicle, even if the operator or rider is wearing a helmet.

Additionally, the impact of a two-ton mass of metal on a lightweight bike tends to result in the rider being ejected. This is when the most serious injuries occur.

Among those injuries most often seen in motorcycle crashes are:

Those who survive often require extensive medical care, including surgery, medication and rehabilitation. In some cases, an injury may be disabling and permanent.

In addition to a rider’s hospital records, your attorney will want to initiate a full medical evaluation by medical experts who will be prepared to testify regarding the short-term injuries and long-term prognosis.

Once our team has a better sense of these facts, we will seek to pursue compensation.

These damages may include:

Actual recovery will depend on the individual facts of the case, and whether the motorcycle rider shared any percentage of the blame for the crash (called comparative fault). This will not bar recovery, but it might limit the total amount you can recover.

If you have been injured in a motorcycle accident, call our team of lawyers in Boston to discuss the facts of your case and how best to proceed.

Contact the Law Offices of Jeffrey S. Glassman today for a free and confidential consultation.

Verdicts & Settlements
Motorcycle FAQs
Motorcycle Accidents
Areas We Serve
Other Motor Vehicle Accidents
BOSTON CAR ACCIDENT LAWYER BLOG - Motorcycle Accident
Boston Personal Injury Attorney Blog - Motorcycle Accidents
Client Reviews
★★★★★
Choosing Jeffrey Glassman law firm was the best decision I could ever have made. They treated me with complete respect and made me feel protected. Kate Y, Google User
★★★★★
I am so happy that I decided to sign on with the Law office of Jeffrey Glassman. This law firm met all my expectations and more, I would highly recommend them. Anne Nadeau, Google User
★★★★★
I am very happy with the services they provide. Although I hate that I have been in pain since the accident I am very grateful I had someone working hard on my side. With so many firms in the area, it's hard to know which one to choose; this is a firm that will definitely put 110% into your case! Julie Tran, Google User
★★★★★
Jeffrey Glassman and his associates were great. They were with me from the beginning to the end and kept me informed throughout the process. I would recommend this law firm. Ann S, Yelp User
★★★★★
I used the Law Offices of Jeffrey S. Glassman for a painful and frustrating worker's comp case and had an absolutely fantastic experience. They were attentive, professional, knowledgeable, transparent, and genuinely caring. I can't recommend them highly enough. Anna K, Yelp User
View More
Submit a Law Firm Client Review